Why Mr. Trump Should Scare You 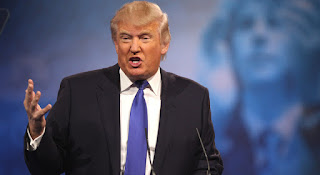 In last night's Republican debate in Houston, Donald Trump finally took a beating from at least two of his fellow candidates, Mr. Rubio and Mr. Cruz. Two particularly shady exploits from Mr. Trump's past came into the light: the possibly bogus and unlicensed Trump University that ran for five years and took in some $40 million, and the use and misuse of illegal Polish workers to help build the Trump Tower by the tight deadline.

Can these revelations slow down the Trump parade? Will people care?

Much of America seems to have fallen in love with Mr. Trump over the past several months, as the polls show. Is it his get-tough rhetoric to "make America great again," or is it in large part our obsession with celebrities and entertainment? Mr. Trump has long been a celebrity, even playing the kingpin role in the reality TV show, "The Apprentice." And he is certainly entertaining, with his unrestrained language, expressive facial movements, and brutally frank remarks. The viewing (and voting) public seems to be lapping it up, so Mr. Trump untiringly dishes it out.

But we are talking about someone who proposes to take on the job of leading a country, of representing us to the world. That is serious business, even for a world-famous businessman.

One of Mr. Trump's strongest claims is that he will be good for the country because he is so rich he cannot be bought by special interests. Makes sense. But how did he get so rich? That story is not completely nice. And just how rich is he? While Mr. Trump puts his worth at $10 billion, others add it up to be more like $4 billion. Either way, that IS a lot of money and, more importantly, a lot of power.

Everything about Mr. Trump shouts that he is used to using that power however he sees fit. This kind of uber confidence no doubt helped him succeed wildly in business, but is it a good feature in the President of the United States? Already we have in place a President who has used his power to sign a startling number of executive orders so he can side-step an uncooperative Congress. Do we want more of that?

Mr. Trump has waffled on major issues over recent years and gives no evidence of having any real understanding of the problems facing our country. His coarse, even ruthless statements in front of microphones about anyone who opposes him should frighten rather than attract the thoughtful voter. Still, no matter what, his throng of fans continues to follow, admiring his bravado and take-charge promises.

Jonah Goldberg makes a disturbing but insightful case regarding the dangerous power of celebrity in today's culture. In his column, "Celebrity Culture Tends to Corrupt Us All,"* he cites the famous quote about absolute power corrupting absolutely. But he widens our view on that: Absolute power, like the power of the big celebrity, corrupts not just the man himself but also those around him. Normal people are somehow willing to do things for him that their conscience would, for anyone else, not let them; they cover up for him; in short, they become corrupted.

Mr. Trump, given the chance, could do a lot of damage to the nation with his loose-cannon approach to getting things done. His powerful celebrity status also gives him the ability to sow the kind of dangerous seeds that Mr. Goldberg describes. That so many of our fellow Americans embrace him as their hoped-for leader should give us grave pause.

Maybe this will turn out like the last two elections, when all the warning signs surrounding the young senator from Illinois were brushed aside by enough Americans to put him into the Oval Office--not once but twice. Maybe we as a country have lost the crucial ability to be scared.
_____
*National Review Online, February 26, 2016.
Trump image courtesy of spiked-online.com.