When life is a layover 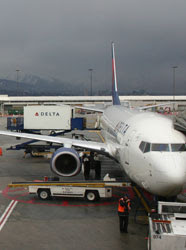 My husband and I flew to Vegas a week ago for business. While we waited out our three-hour layover in Salt Lake City I yearned for the days of direct flights--especially when a young woman sat down across from us at the gate, plugged something into her ear, flipped open her laptop, and began reporting at full volume to her colleague on the line about the youth conference she had just left.

Once on the plane, the layover got still longer. With high winds in Vegas, we needed to wait an hour before heading that way.

Now it strikes me that much of my life feels like a layover: time I spend not doing anything particularly pleasant or productive. That does not mean I'm idle. But maybe you feel that way, too, when making your son's millionth peanut-butter-no-jelly sandwich, or holding for the IRS (again), or waiting for the doctor to look at your daughter's third ear infection in as many months, or driving to a dull job while wondering what you're really supposed to be doing with your talents.

Father Lasance wrote this comfort and warning to us:

"It is worthwhile now for me, --now while the brief occasion lasts--to overcome one temptation, to do one small kindness, to improve my mind by one half-hour of study, to wait in patience when there is nothing else to be done, to bear a headache, or sleeplessness, or some small pain. Life can not be filled with great deeds, nor deeds of manifest profit and advantage to oneself and mankind."*

Daily I need to remind myself that life is not like a novel or a movie, where the writer has crammed all the highlights into two hours or three hundred pages. In the span of one's life, you might get twenty good pages out of the whole thing. If you are unusually dynamic, a hundred. Even at that, though, in the day-to-day crawl, it probably won't feel like much is happening. But if we keep in mind Father Lasance's words, our spirit can be growing seven days a week, even--or especially--during the layovers.
__________
*My Prayer Book by Father Lasance, 1908.

Another hazard from Japan

While Toyota's top brass are getting grilled by Congress on how they could let us drive around in cars with "sudden unanticipated acceleration," we have another product from that island nation that carries its own unanticipated hazard.

Comic books. They're called manga, which is comics or cartoons in Japanese. And while some analysts point to ancient, illustrated scrolls for manga's origins, the most obvious birth of these cartoons followed the U.S. occupation of Japan from 1945 to 1952. The Japanese saw the GI's comic books and decided to made them their own.

The first ones were innocuous enough, largely aimed at children. In the fifties and sixties, they branched off into darker styles. In the 1990s, as Japan relaxed their censorship laws, they got wilder, with several lines of manga offering harshly violent story lines and explicit sexuality, especially in the class of manga aimed at adults.

Okay, but that's in Japan. And people can buy manga here if they want, but they can buy lots of other p*rn too. But here's where the unanticipated part comes in.

As I searched my local library's collection of books on CD yesterday, I wandered a few aisles over to see if they had more there. To my surprise, I found a shelf of manga books. Having heard from my college-age daughter that manga could be pretty rough, I pulled one out and started thumbing through. The innocent, wide-eyed girls in the illustrations were being led through sexual paces that made me lean against a book rack in shock. There was language to match.

So I took this piece of literature to the assistant branch manager and asked why it was on the shelf. "Well, it's in the adult section," she countered. But manga has a huge youth following, I protested. And my tax money is paying for this thing? She gave me a form to submit, detailing my objections, which I filled out and gave back. We'll see what happens.

So moms, beware: The childish look of manga can belie its chilling contents. And understand that your public library has these (and other) disturbing materials in easy reach of your adolescent and teen, with no restrictions on viewing or borrowing.

And they wonder why our teens are in such trouble . . .

UPDATE from my last column: I am doing fine without my Clean House friends and have let them go with surprising ease. Same goes for the viewing of DVDs. Reading is up.
________________
Image from http://www.picsearch.com. Manga history from Wikipedia.

Posted by Ann Maureen Doyle at 1:13 PM No comments: