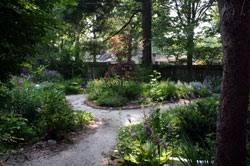 On a walk through her once-glorious garden, as it shows the effects of two gardeners being let go for want of money to pay them, Agnes Somerset (in a novel by the same name) observes to her aunt, "Do you know what gardening is, Vera? It is man’s attempt to keep Nature from doing what she is determined to do. How could we hope to win in the long run?”

The back yard in the house we bought almost four years ago is all garden--no grass. How lovely, we enthused when we first walked down its mulched paths. How imaginative. How un-suburban. By the second year, I could be found on the back stoop, glowering at the tangled piles of uninvited growth, the dead iris and lily stalks, and the vast swathes of some lemon-scented plant that had by then revealed its plans to conquer the entire yard. The fat, spiny yuccas are too terrible to talk about here, except to say that a quick Internet search will teach anyone why they have no business in a civilized garden (dig one out and six vigorous cadets spring up to replace their fallen comrade).

My husband has tried to comfort me as I predict nothing but aggravation from the rear third of our property. "I'll work on it," he assures me. But he has too many other duties. The garden as planted could employ a gardener full-time. In fact, I later found out that is exactly what the former lady of the house was. She devoted herself to these oddly planted beds, keeping meticulous notes and photos in a journal I inherited. ("Didn't get pictures of my new asiatic lilies, but they were beautiful! Poppies bloomed while we were in Italy.") Her husband was assigned all indoor housework and maintenance.

In my defense, I do keep up the front garden and the porch's potted flowers. The bird bath is refreshed each day and the finch feeder regularly refilled. I sweep the stoop and the front walk and wipe away the larger spiderwebs from the mailbox. I am, after all, a front-yard person at heart and enjoy attending to these areas that I pass by with every coming and going.

But the back yard . . . I took a good deal of comfort in a book on bird-feeding that I read the other day. It encouraged bird lovers to leave a natural habitat in part of the yard, if possible, so various birds could feed and find nesting places among the dried flower heads and matted vines. I can do that!

At this moment, a large brown-and-yellow butterfly is sailing about the back yard in search of a bloom, ignoring the only flowering things I have at present, some lavender phlox and a stand of brown-eyed Susans. OK, so my quasi-meadow isn't to everyone's taste. Maybe I'll throw down a packet of goldenrod seeds next spring--but that's if I can clear some space from that lemon-smelling plant and the grass that's taken over the middle bed.

Agnes bent to unwind a thin vine from the creamy bells of a late-blooming foxglove. “They don’t know what’s coming,” she mused. “The foxgloves and the roses and the hibiscus. Choke-weed and violets will overrun them in no time."

I salute all the gardeners, who dig and pluck and plant and water, engaging in this tension between man's designs and Nature's tireless engine.
____________
Quotes are from Agnes Somerset by yours truly, A. M. Doyle.