Attacked by the Love and Compassion Crowd (or, What's So Great About Unity? 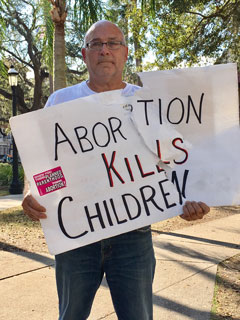 Doug Russo must have had a hunch that the Unity in Community rally here in St. Augustine this afternoon would need some balance that he could provide. Or maybe he took the organizers at their word, that this was to be "not a protest rally" but a time for us to come together in civility and learn to listen and talk with one another.

So he came to the Plaza de la Constitucion with his sign and quietly stood at one end, taking advantage of his Constitutional right to express his opinion. But evidently he was not unified enough. He did not love enough. Because a gang of attendees separated themselves from their fellow sign-carriers ("Stop the Hate," "Make America Kind Again," etc.) and surrounded him. They pulled him from the stone bench he stood on, shoved him, and knocked him to the ground. These ambassadors of honest dialog also tore his sign in two before they were done.

Fortunately, some people intervened, and Doug (not one to be easily chased away), dusted himself off, picked up the pieces of his sign, and resumed his position atop the stone bench. That's where I found him an hour later, still making his silent statement that "Abortion Kills Children."

This contemptible behavior by some of the Love and Unity folks comes as little surprise to many of us. We have seen for a long time the astounding contradiction between their words and their tactics toward those who oppose them. As you stir this strange pot, a crucial question rises to the surface: What's so great about unity, anyway?

The most unified countries are not places you would want to live. They are Communist countries, where no dissent from the Party line is allowed, no free thinking, no "divisive" expressions of personal beliefs. Is that what we're after?

I think not. We should remember that from the earliest days of our nation, we have been a people divided. Should we rebel or remain loyal to the crown? Should we leave the South's economy alone or eliminate slavery? Should we outlaw alcohol to reduce the ruinous effects of it on families or does each man have the right to as much whiskey as he can hold? And on and on.

Some of our differences involve logistics: What's the most effective way to get something done? Some involve allegiances to different economic models and taxation plans. But the most incendiary, as we see today, have to do with traditional moral values or the shedding of them.

And I find that beneath the cries of "Unity!" and "Compassion!" usually lies an insistence that people of traditional (Christian) values leave those beliefs behind. The new-age folks seem to think that clinging to these ideas--that unborn babies are people with rights and value, or that only a man plus a woman can make a true marriage--is so heinous as to constitute a crime against the new humanity. As such, you have no right to that belief and must be suppressed. Then we'll have unity!

Before I left Doug and headed home, two ladies walked past us, saw his sign, and asked if this was an anti-abortion rally. Doug said yes, and I explained that at this end (that is, Doug and his bench) it was, but over there (indicating the crowd), "Not so much." They walked on with a puzzled look.

But it's really simple. The last thing we want in the United States is unity, unless we must come together to defend ourselves from an enemy or rebuild from a hurricane.  The normal state of these United States is disagreement, the co-existence of starkly different ideologies and approaches to any given problem. But if we want to be a civilized country, we will not tear our opponents'--or their signs--to pieces, no matter how much we want to.

Sometimes our causes and candidates will win, and often they will lose. That's when we get to maintain our dignity and try again.