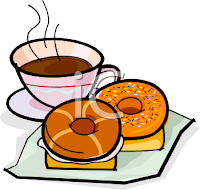 I was really looking forward to a fresh bagel and coffee around lunchtime today as my husband and I headed for our favorite bagel bistro, the one we pop into twice a week. We pulled open the door as we chattered together and got in line, socially distanced. The cashier up front started saying something to us. She pointed to the door. It took us a minute to understand that she was telling us we now needed a mask to enter their establishment. See sign on door.

Why? we asked. What changed? We had been coming in for months without a mask, as had a number of other customers, after the local government dropped the mask requirement. Has there been some huge, deadly COVID spike we didn't know about? Was there a new mask edict from the authorities?

Turns out nothing had changed--or so we were told. It's just a small restaurant, so we need to be careful, the staff said. At home I checked the latest stats on the Florida Department of Health web site. Nope, no spike. And the virus has gotten less deadly: If you contract the virus, the chance of dying from it back in October was 2%, while now it is 1.5%.

So what's going on? Maybe some frightened customer gave the bagel makers holy hell for endangering the public's lives by not mandating masks in their business. He might even have threatened to sue if he came down with the virus after enjoying his spinach-tomato bagel. (We have encountered such zealots. Shortly before Christmas, in a grocery store checkout line, a grizzled man in a Santa hat told us we were going to burn in hell for not wearing masks, even though we explained that we'd had the virus and could not give it to anyone.)

Maybe someone in the bagel shop tested positive in the four days since we'd been there, and management figured this called for "masking up." Or is it just the Biden-Fauci effect, in which masks--even double masks--are being encouraged and even demanded even in the most non-threatening settings?

I only know that I did not get my bagel or coffee. My husband turned on his heel and I followed him out. The day had just gotten a lot darker.