In Praise of Dracula 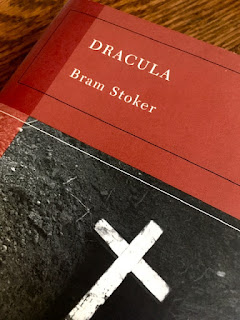 I speak not of the creature, but of the book. If you have not yet read the original tale by Bram Stoker, first presented to the world in 1897, then you can be sure you do not know the story at all. I thought I did, having enjoyed Bela Lugosi's famous portrayal of the fiend, as well as Frank Langella's mesmerizing interpretation of the bloodthirsty count.

But none of this Hollywood mishmash presents Stoker's actual tale of knee-buckling terror, courage, and faith. It's an important story for our time, as evil seems to loom larger than ever today over what we were used to calling normal life. Daily we hear of dark goings-on at a scale we can hardly grasp, frightening machinations hidden in the shadows, unholy deals struck behind a screen of deceit.

Halfway through Dracula, Dr. Seward records in his diary a conversation with Dr. Van Helsing, the one man who understands fully what they are up against with the vampire:

"Dr. Van Helsing, are you mad?" [I asked]. He raised his head and looked at me, and somehow the tenderness of his face calmed me at once. "Would I were!" he said. "Madness were easy to bear compared with truth like this."

Have we not felt the same at discoveries we make while reading the morning's news (and I am not referring to stories found in the mainstream misinformation media)?

While Dracula is a masterful tale of terror, it is much more. It is a story of heroic bravery in the face of incomprehensible darkness, of men joining forces to defend their women from ruin, of the triumph of this solidarity, armed with the sword of Christian faith, against terrible odds. Sound relevant?

Stoker tells his story in a collection of diary entries, letters, and other writings all penned by the various characters as their adventure unfolds. This intricate account of their contest, the struggle for the very souls of their loved ones, offers as many lessons today as it did more than a century ago.