Activists Challenge the Nation With Their 45-Foot Naked Woman 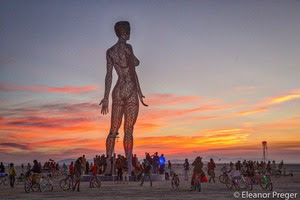 Oh, my! Have you seen what some people are trying to erect on the National Mall in D.C.? Nothing less than a 45-foot-tall naked woman made very realistically of steel tubing.

The sculpture is called R-Evolution (so clever, eh?!) and is the handiwork of artist Marco Cochrane. It is headed for the Mall thanks to the efforts of a group of activists, artists, and community organizers for an event known as  Catharsis on the Mall.

You might feel a tad embarrassed looking upon this towering, lifelike female who seems to have just stepped out of the shower, wondering where she put her robe. I imagine that the parents and teachers of the countless children who swarm the Mall each month will probably feel the same way.

But Mr. Cochrane, explains the piece this way (it is part of a trilogy of female figures): "They are intended to challenge the viewer to see past the sexual charge that has developed around the female body, which has been used for power and control, to the human being.  They are intended to de-objectify women and inspire men and women to take action to end violence against women, thus allowing both women and men to live fully and thrive."

If I had a nickel for every time I've heard this argument from the fearless folks on the left . . . It's the one that maintains that if we would just throw off the rusted shackles of prudery and embolden women to display their bodies unabashedly, women could then get some respect. They would no longer be "ashamed" of their bodies and would feel the empowerment that has long been due them.

Unfortunately, this plan, as evolved as it sounds, just does not work. Women have been wearing less and less, exposing their bodies more and more, since the beginning of the last century. However, strangely enough, the objectification of women proceeds apace. In fact, from what I see, it has only gained momentum. Note the unprecedented glut of pornography in every conceivable format as well as the worldwide plague of sexual trafficking and forced abortions, not to mention the inhuman 4-inch heels that female talk show hostesses and newscasters are made to wear, the pressure to surgically enhance women's figures, and so on.

The truth is, as some astute writers have pointed out, true empowerment for a woman lies in large part in her modesty, not her bold display of more and more of her body parts. A tasteful covering of provocative features brings the attention of her listener or her companion to her face, to her words, to her actions. The companion is not distracted by her sexuality and can instead focus on what she is saying. What an idea!

We are foolish to think that men, given enough exposure to exposed women, will stop seeing them in a sexual light. Men have been wired this way from creation and this will certainly continue. I do not advocate burkas. I do call for sensible and attractive clothing--on both men and women--to help us see each other as humans first, without the overt distraction of a strip-club sort of presentation.

According to a USA Today article (Sept. 29, 2017) on the controversial naked steel woman, "The sculpture is being brought to Washington, D.C. [from San Francisco] by the organizers of Catharsis on the Mall, an annual three-day event that features 24-hour activities, music and an effigy burn." And it's all about equal rights for women, too, with special emphasis on resurrecting the Equal Rights Amendment. The event concludes with a torching of effigies. Now, if that doesn't sound like an uplifting family activity, I don't know what.