Miracle of the Rain 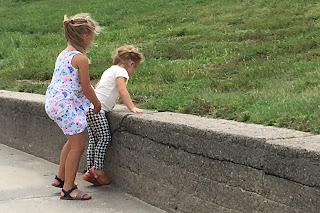 Something remarkable happened yesterday. It was Sunday, October 1. Once again, like every year, the pro-life faithful were set to line a short stretch of U.S. 1 at 2:00 and hold up signs to passing drivers, reminding them of the miracle of new life and that it must be protected.  For one hour, as their children and grandchildren played behind them, these people would form a few dozen links in the Life Chain stretching across the country.

But it was raining. It had been raining since the day before. Not on and off, as we usually see, but nonstop, at times a drenching downpour, then lightening to an even shower. It poured through Saturday night and all Sunday morning, and drops continued to spatter the windshield as we drove to the rendezvous point a few minutes til two. We arrived just in time to grab a sign and form a line facing the oncoming traffic. But as we did this, the clouds ran out of water. They still hung darkly overhead, and the wind blew, but we stood with our paper signs, dry and comfortable.

Cars zoomed past us. Some drivers looked, many did not. Some honked their horns and cheered, most passed silently. I waved to one car that was slowing to a stop at the traffic light. In the passenger seat was a boy not more than ten, staring at me. He did not smile. Just before they pulled away from the green light, he raised his little hand and gave me the finger, and I could discern the driver beside him leaning toward me, making the same gesture. I stared back at the boy, my eyes wide as I involuntary cried "No!" in my dismay. He and his grown-up companion were the only ones to offer such a greeting to me that day.

Three o'clock came and we disbursed slowly. As we gave back our signs and chatted with friends, raindrops began to fall on us. Soon the thickening shower drove us into our cars. The rain had stopped for one hour and fifteen minutes--exactly enough time. The drenching rain kept up for several more hours then, without another break.

I do pray for another miracle, though: that the boy who offered us a vulgar insult will remain uncomfortable with that memory, so that in the course of time he will examine why all those people saw fit to stand by the road that day when he was ten, below threatening skies, smiling and waving at him and holding signs about babies. Who knows--he might one day stand by the road with just such a sign or try in some other way to change things so that the Chain is no longer even needed.